When it comes to outdoor activities for kids, sometimes the good old classic games are still the best!  Work in some gross motor fun tonight with one of these old school summer favorites!  Check out these other awesome group games for kids! 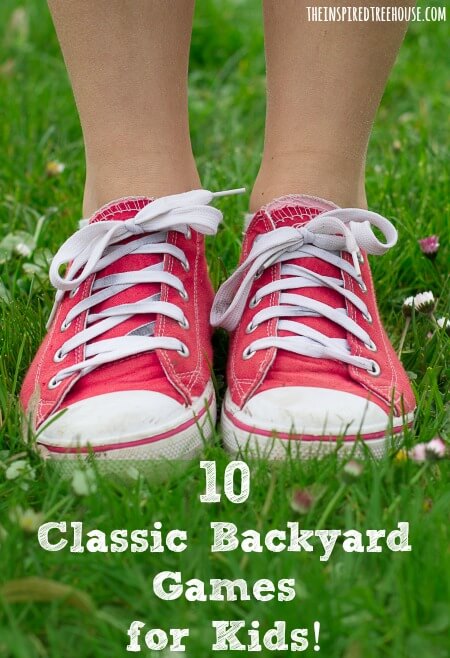 2 || GHOSTS IN THE GRAVEYARD

This game is best in the evening or at dusk. One child is designated as the “ghost” and runs to hide while all of the other children gather at a designated “home base” and count to 30. Then everyone scatters to find the ghost. When a player spots the ghost, they yell out “ghost in the graveyard” and everyone attempts to make it back to base safely without being tagged by the ghost. Whoever is tagged first is the next ghost!

This variation of tag is played at night! Instead of being tagged by the touch of a hand, the “it” player tags by shining a flashlight beam on the other players. Once tagged by the light beam, you are out!

In this game, kids are divided into two equal teams, the cops and the robbers. The cops chase the robbers in hopes of tagging them and putting them all in jail! A robber can free a prisoner by tagging him as long as he avoids getting tagged himself. The game ends once all of the robbers are in jail.

Two teams each have a flag. The object is to capture the other team’s flag and bring it back to your own base. If you tag an enemy player, he is out of the game! Or you can play the version where the enemy player is frozen in place if he gets tagged until touched by one of his own team members to be released.

Two teams stand in lines on opposite sides of the yard, holding hands side by side.  One team decides on a player from the opposing team to “call over”.  They yell out, “RED ROVER, RED ROVER, LET [PLAYER’S NAME] COME OVER!”  The player who was called then has to run toward the other team’s line and try to break through the chain where two of the players are holding hands.

If he breaks the chain, he selects a player from the opposing team to come back and join his team on the opposite side of the yard.  If he doesn’t break through, he joins the opposing team.  Repeat until one team has all of the players!

The whole group sits in a circle facing each other.  One child remains standing.  This child will be the “ducker” as we like to call it :)  This child walks around the outside of the circle, tapping each player on the head as he says, “DUCK”.  He can “duck” as many players as he wants until he reaches a child he wants to choose.  Then, he taps the child’s head and says, “GOOSE!”  The child whose head he tapped has to get up and chase the “ducker” around the circle, trying to tag him.  If the “ducker” gets tagged, he is out and has to sit in the middle of the circle.  If he makes it all the way back to the other child’s seat without being tagged, the other child gets to be the “ducker” on the next round.

Each player in the group is secretly assigned a number by an adult, starting at 1 and counting up to as many kids as are playing.  One player is “it” and stands in the center of the yard.  The other players gather in a circle around the person who is “it” at an equal distance.  The person who is “it” throws the ball straight up into the air and calls out a number between 1 and however many kids are playing.  Whichever child’s number is called has to run as quickly as possible to get the ball while all of the other players run away as fast as they can.

When the child reaches the ball, he calls out “SPUD!” and all of the running players have to freeze.  The player who has the ball is then allowed to take 5 giant steps toward one of the other players and then try to hit him or her with the ball.  The person can’t run, but can duck or otherwise try to move out of the way.  If the other player is hit by the ball, he gets a letter (gradually spelling out SPUD if he gets hit more than once) and is the “thrower” during the next round.  When a player gets all four letters, he is out.  The last one standing wins!

How to Change it Up

-Have players wear neon bandanas or glow in the dark bracelets/necklaces for an easier visual target in the dark.
-Allow the player who is “it” to simply call out the player’s name to tag him rather than having to physically touch him.
-Require the players to move around rather than staying hidden if the person who is “it”  isn’t mobile. Let his or her eyes do the work!
-Make the playing area smaller for easier and faster play.
-Partner up! Kids can help each other understand the rules and can help each other hide.

Pam Braley has been an occupational therapist since 1997 and has worked in several environments including pediatric inpatient and outpatient rehabilitation, step down NICU, and currently school based for the past 8 years. She is a mother of two beautiful children, Jack (7) and Ella (5). Pam enjoys cooking, reading a good book, exercising including walks, yoga, and training with friends. This quote has traveled with Pam to each desk she has claimed while being an OT and helps her stay focused both in her career and as a mom.