Have you ever wondered when kids should start sharing and taking turns?  Or how to support them as they learn these challenging skills?  Our friend, Becky Bowen, M.A. CCC-SLP, is here today to help! 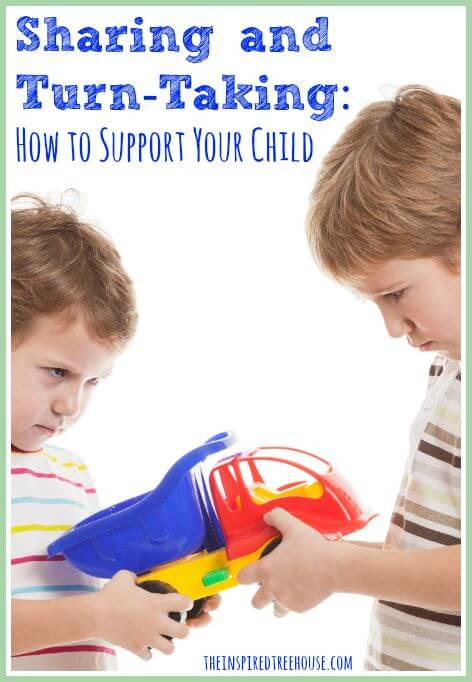 My daughter was about 6 months old, just starting to sit up without support, the first time I told her to share a toy.

I had gotten together with several other moms for a “playdate,” (really just an excuse for mothers of infants to interact with someone who could talk back for a few hours). A slightly-older crawler was interested in the toy keys my daughter was gnawing on and, like any mother who wants to raise a sociable and likable little person, I wanted her to share.

Taking turns and sharing are critical stepping stones on the way to more complex social interactions. The ability to make friends and be socially accepted begins with the desire to engage others through sharing.

Despite the social pressures of wanting our babies and kids to get along with others, take turns, and share – children actually don’t grasp the concept of sharing and taking turns until about 4 years of age. Before that there are several developmental stages they move through.

At this age, children are just beginning to develop preferences for certain toys and objects. During this stage, a scuffle over toys is easily remedied by swapping the desired object with one of similar size and weight à la Raiders of the Lost Ark.

Two-year-old logic dictates that if I’m holding it, thinking about it or looking at it, it’s mine. If you want it, it’s mine and if I’ve had possession of it in the memorable past it’s mine. Although this logic can be hard to deal with, it is a very normal stage of development for children. Managing your expectations and gently modeling sharing behavior yourself can make this stage more bearable.

Three- and 4-year-olds understand the basics of sharing and turn-taking. Mostly, they know that their parents praise them for sharing and disapprove when they don’t do it. Frequent reminders are necessary, but they are in fact starting to act in a sociable manner – if only because you tell them to.

As children approach school age, they become more aware of how others feel and how their behavior impacts their peers’ perceptions of them. They begin to grasp that their actions are related to reactions in others and how they are perceived. For example: When I yell at my friend, he cries. If I yell at my friend, people think I’m mean. At this point, kids share and take turns not only because they are told to, but because they reap the social benefits of doing so – other people share their things with them.

How to help your child develop sharing and turn-taking skills:

5 Tools to support sharing and turn-taking in kids:

1 || Visual Timer – A great way for kids to be able to see exactly how much time is left before it’s their turn!

2 || Kitchen Timer – An even simpler timer option to let kids know that the time is ticking, helping them wait their turn.

4 || Card Games – Fast-moving games like Go Fish and UNO are great for working on turn-taking.

5 || Balls for ball games – The Rhino Toys Oball is easy to grip and fun for playing catch and the Goliath Games Phlat Ball is really cool too!

M.A. CCC-SLP at The Center for LifeSkills
Rebecca Bowen, M.A. CCC-SLP, is a speech-language pathologist with extensive experience in articulation, language disorders, fluency, voice and hearing loss. She joined the Center for LifeSkills in 2011 and is currently the co-director of Timbernook of Greater Cleveland. Apart from her pediatric work at The Center for LifeSkills, she has a diverse background of clinical experience, including work at University Hospitals and the Cleveland Clinic. She earned her master's degree in speech-language pathology from the University of Akron and her bachelor's degree from Ohio University. In addition, she earned a joint University of Akron/Kent State university specialty certification in pediatric hearing loss. Rebecca is also a mother of three amazing little people and lives near Cleveland, Ohio.