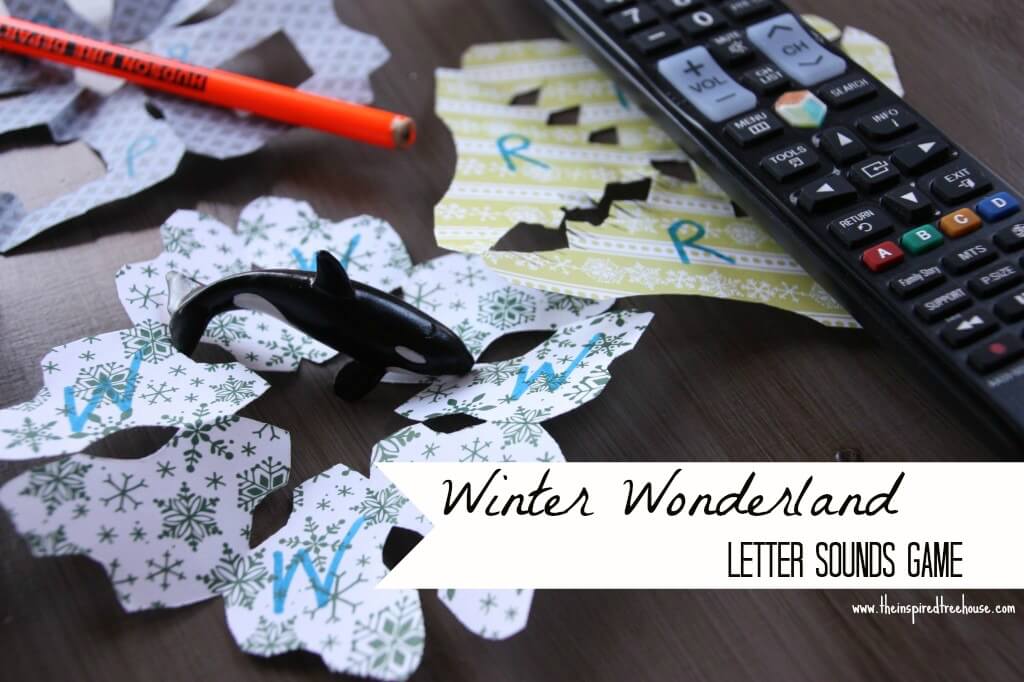 We’re so excited to welcome Rachel Antrim to The Inspired Treehouse today! Rachel is studying Communication Disorders at Baldwin Wallace University and created today’s Winter Wonderland Letter Sounds Game.  Thanks to our good friend, Christie Needham (Assistant Professor and Director of the Baldwin Wallace Speech Clinic) for putting us in touch with Rachel! Here is a phonological awareness game for young kids.

WHAT YOU’LL NEED:   Scissors, construction paper (or any paper), markers

WHAT TO DO:  Fold a piece of paper in half and make creative cuts all over it to make a snowflake. If your child can safely handle scissors, allow him or her to help you or make cuts of his/her own!   Then, have your child write a letter on the snowflake where there is still room. If your child is still learning to write the letters of the alphabet, you can lightly trace a letter for him or her to trace over with marker. You could also try a hand-over-hand approach while telling your child what letter you are writing.  Make several snowflakes, writing letters on each one.

Then, begin to explain to your child what sound(s) each of the letters make. Go around the house and find a variety of objects that start with all different letters. Then place those objects on or near the snowflake with the corresponding letter on them. For example, place a pen on the snowflake with a “p” on it, place an orange on a the snowflake with an “o” on it. This is a wonderful way for you to begin talking with your child about the alphabet and the sounds that letters make.  This fun game can even help to build vocabulary while you are hunting for objects around your home!

HOW TO CHANGE IT UP:
-Instead of finding objects that start with a certain letter, you and your child can take some of his/her toys and place them on the snowflake that corresponds to the first letter of something that toy may say. For example, if your child has a toy cat, the cat could be placed on the snowflake with the “m” on it because cats say “meow.”
-If you are interested in continuing this game with your child, consider saving old tissue boxes or paper bags that you can write letters on to place objects inside.